Epic Eclipse in the ATL

Epic Eclipse in the ATL

As a street photographer and ATLien, I just couldn’t commit to leaving the streets I love so much in favor of a countryside view of this most epic event. Nevermind the crowds, the traffic and the unknown challenges all of that would present (hashtag no thanks). The more I’d read about shooting the eclipse (and the more images I encountered over my searches), the more it led me to what I think is the only reasonable conclusion a street photographer can make. No matter where I might travel to, I would still not be equipped or skilled enough to capture the most awesomely detailed or perfectly exposed eclipse shot the world has ever seen, nor is there any shortage of such eclipse portraits all over the interwebs. Not to mention NASA & NatGeo definitely have this shit covered.

My best approach was going to be framing the foreground. I needed to set the scene of the eclipse from my own point-of-view, and my specific location in its path, even if it was only at 97%. So I set out to find the perfect cityscape location in Atlanta. I scouted skyline views near and far, but with the high position of the sun, I would have to go too far outside of the city to get a good horizon shot with the skyline, and I wasn’t feeling awesome about driving anywhere in metro Atlanta on eclipse day. That’s when it hit me that the only way I wanted to shoot this bad boy, is not from the perspective of the horizon, but from the street, looking straight up into the sky at that ball of fire. And with that revelation, I knew exactly where I wanted to shoot it.

Peachtree Center is an epic, urban masterpiece in Downtown Atlanta. It’s also a location that I adore, revisit and photograph often. The angles and architectural wonders of John Portman’s signature buildings loom large here. The glass and concrete structures create a perfect urban scene, complete with leading lines into an abstract picture frame, bedazzled with reflections from the windows and Portman’s more recent modern statue of Belle on the street. I took a few test shots on the Saturday before the eclipse, and felt confident this was gonna be the sweet spot for me. 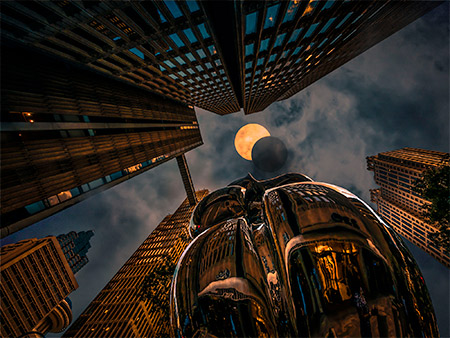 As it turned out, this location did not disappoint. Just blocks away from the big party in Woodruff Park, I was able to escape the crowds and stay focused on my agenda. The skies were partly cloudy, which I’m not gonna lie, was a little frustrating at times! But in the end, those cloudy skies delivered some of my most dramatic images, and enabled me to create some pretty decent composites marrying a unique foreground to an epic background. Sure, I could have seen full totality had I made the trek further north. Of course it would have been amazing, and I could have captured the “diamond ring” and all that jazz. The only thing I would have been missing in that scenario would have been the heart and soul of the streets of Atlanta. And I just couldn’t leave that part out.

I predominantly use Mirrorless/Micro Four Thirds cameras and lenses by Panasonic LUMIX & Olympus, and I also recently bought a Sony and have been giving that a try. You can browse all my favorite camera gear on my Amazon Influencer Page, where you’ll find links to all of my favorite cameras & lenses from LUMIX, Olympus, and Sony. I edit professionally in Adobe Lightroom & Adobe Photoshop.  I post a curated collection of images consistently on my Instagram feed, or you can find even more of my professional photography on Flickr.

20+ YEARS OF EXPERIENCE fueled by coffee, music, travel, art, film and my dog Miso Puggie. Follow our adventures on Instagram (@graphiknation) or join us for the next Atlanta Urban Photo Walkers meetup event.